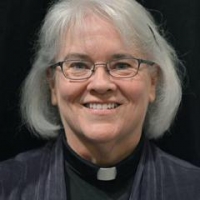 
Mthr Betty is the Rector (Priest) at St. Matthew’s. She came to Fairbanks from Kansas, although she had spent a number of years in Alaska in the 70’s and 80’s – even graduating high school in Delta Junction, 100 miles down the Richardson Highway.

Ordained to the Diaconate in 1997, Mthr Betty engaged in her Vocation as the Executive Director of the Kansas State Child Death Review Board, and then as a full-time Hospital Chaplain in a Topeka, KS regional hospital for about 7 years, before going to Virginia Theological Seminary in Alexandria, VA and being ordained a Priest in 2007.

Mthr Betty has served churches many years as a volunteer Law Enforcement Chaplain with police agencies in Kansas. She is now a volunteer with Fairbanks Police Department in their Volunteers in Police Service, as a Patrol Leader. 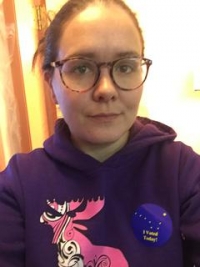 Jessica Ives has served as the Parish Administrator at St. Matthew’s since 2015. Her responsibilities are wide ranging, and seem to evolve constantly as the reality of the Pandemic has become a part of our lives, in and out of the church!

A life-long resident of Fairbanks, Jessica’s family has strong ties to the Village of Tanana on her mothers side. She grew up attending St. Matthew’s as a child and youth. Family time is a high priority in Jessica’s life as her and her husband Mike raise their two daughters. They enjoy vacationing and camping. In her free time Jessica enjoys arting, of all kind!

Share this page: Who We Are
YOU are Welcome! How has Covid Changed Us Who We Are What to Expect What is the Episcopal Church History
View Entire Post

Due to the uncertainty around the spread of the Coronavirus, the Bishop of Alaska continues to suspend all public worship services in our churches. The Bishop, and all of us, are monitoring the recommendations from the CDC and the State of Alaska, and are in frequent conversation about mitigation plans (reopening plans) that can be put in place after careful planning.

We are live-streaming our services on our Facebook page or you can watch it online.

Please join in our worship opportunities.

If you need to reach us, our phone number is: 907-456-5235... follow the prompts to leave a voice message for the Parish Administrator or the Rector (Priest).

Love God, Love Your Neighbor...Practice Kindness, it's contagious... and... Wash your Hands. We will return to our regular worship when it is safe to do so.

St. Matthew’s has been part of the life of Fairbanks since 1904, and is housed in a historic log building, near downtown Fairbanks, just across from the Chena River.

We offer a Holy space to rest for a bit and engage with our diverse congregation, worshiping in the Episcopal tradition.

Welcome – Wander around our website – Come worship with us in person or online!

What to Expect What is the Episcopal Church

We are live-streaming our services. Please join in our worship opportunities.

Love God, Love Your Neighbor...Practice Kindness, it's contagious... and... wash your hands. We will return to our regular worship when it is safe to do so.

We are grateful, at St. Matthew’s, to have parishioners who speak languages other than English.

Some of our Indigenous members have volunteered through the years to lead the Lord’s Prayer or the Nicene Creed, for example, in the language of their hearts – perhaps the first language they learned as babies…the language spoken in their homes…

Pre-Covid (and Post-Covid, we hope) we invite parishioners to pray in the ‘language of their hearts’ – which may be English, or Koyukon, or Gwich’in, or French, or Spanish, or... Hearing the familiar words prayed in a language other than our own, simultaneously, brings a sense of fullness, that enhances our worship.

THANK YOU to all who continue to support the life and ministries of St. Matthew's during this Pandemic challenge! With your generosity, we are able to continue our ministries of, among others, offering cold-weather gear to those who need, offer food for the hungry, upgrade our ability to offer live-streamed services 5-6 days a week, and offer support and 'connection to many in Fairbanks and beyond!

Stewardship is how we nurture St. Matthew’s Episcopal Church and our worshiping community. It is how we carry forward a faith community that was given to us by those who came before, and that we are responsible for handing off to future generations. Click the button below to read the 2022 Stewardship Letter or you can simply click the pledge now button.