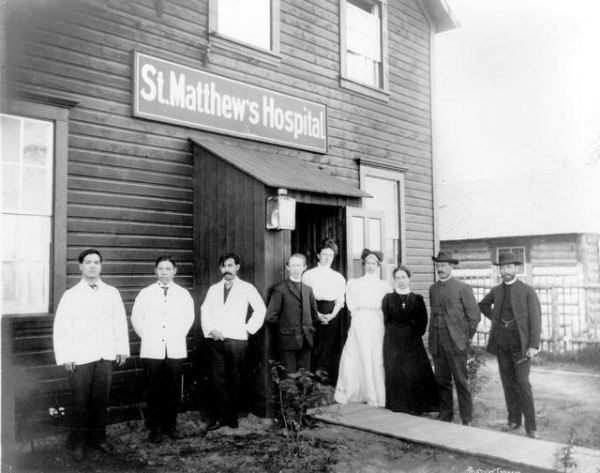 So wrote Archdeacon Stuck about the first services held at St. Matthew's. It was Sunday, October 16th, 1904. The Church filled for services both morning and night. Though an Episcopal service (thanks to the mission in Circle) had been held the previous year in the Fairbanks Saloon, this was the formal beginning of St. Matthew's. Since the calling of the bell that first Sunday, the log church has continued to bring together, across all racial, cultural, and economic boundaries, from Fairbanks and throughout the Interior, everyone - prospectors, trappers, business leaders, visitors, dreamers, pioneers and the newly arrived. St. Matthew's contributed the first Hospital (built on the adjacent lot, providing the only medical care in the area, see 'Founding of St. Matthews Hospital', from the Alaska Churchman, the first library (a reading room in the church), the first kindergarten, and the first Boy Scout troop to the life of Fairbanks. From the doors of St. Matthew's, Stuck led the first successful ascent of Denali; churches were established along the Tanana River; and the first meeting of the Tanana Chiefs was held with the Federal Government.

St. Matthews is one of the three oldest churches in Fairbanks, located on First Avenue, across the street from the Chena River, in Fairbanks, Alaska. The original church building burned in 1947, but the great wooden altar and other carvings were saved, and were replaced with the present St. Matthew's Church building. First services in the new church were held Christmas Eve, 1948. We are the largest Episcopal Church in Interior Alaska and is a diverse congregation.

St. Matthew's has a large outreach, especially for a church it's size. In times past, St. Matthew’s has been pleased to be able to offer regular services at the Pioneer Home, Denali Center and the Fairbanks Correctional Center. In more recent years, those services have been modified due to availability of clergy and public health concerns. In 2018 a renewed emphasis was placed on a Cold Weather Gear Room to help keep our community members warm during the harsh winter months.

Our Lady of Alaska

The icon that comes to visit St. Matthew's was written (icons are "written", not painted) by Master Iconographer Sherry V. Lynch and presented to the Episcopal Church in Alaska at the Diocesan Convention in Anchorage in October 2009. The image, a joint project of the artist and her husband Ron Ridnour of LaCenter, Washington (who prepared the 16 ¾" X 26" wooden support), is call…

St. Matthew's contributed the first Hospital (built on the adjacent lot, providing the only medical care in the area. Read the first-person description of this initiative from Deaconess Clara M. Carter as printed in The Alaska Churchman.

Due to the uncertainty around the spread of the Coronavirus, the Bishop of Alaska continues to suspend all public worship services in our churches. The Bishop, and all of us, are monitoring the recommendations from the CDC and the State of Alaska, and are in frequent conversation about mitigation plans (reopening plans) that can be put in place after careful planning.

We are live-streaming our services on our Facebook page or you can watch it online.

Please join in our worship opportunities.

If you need to reach us, our phone number is: 907-456-5235... follow the prompts to leave a voice message for the Parish Administrator or the Rector (Priest).

Love God, Love Your Neighbor...Practice Kindness, it's contagious... and... Wash your Hands. We will return to our regular worship when it is safe to do so.

St. Matthew’s has been part of the life of Fairbanks since 1904, and is housed in a historic log building, near downtown Fairbanks, just across from the Chena River.

We offer a Holy space to rest for a bit and engage with our diverse congregation, worshiping in the Episcopal tradition.

Welcome – Wander around our website – Come worship with us in person or online!

What to Expect What is the Episcopal Church

The Vestry has decided to resume in-person services. During the summer months we hope to be doing Mass on the Grass as long as the weather cooperates. When the weather is not so great we will go inside the Church with. Our beautiful building is old and has no air ventilation, therefore all indoor services at this time will require masks to be worn.

When we are inside for worship we are live-stream our services. Please join in our worship opportunities.

Love God, Love Your Neighbor...Practice Kindness, it's contagious... and... wash your hands. We will return to our regular worship when it is safe to do so.

We are grateful, at St. Matthew’s, to have parishioners who speak languages other than English.

Some of our Indigenous members have volunteered through the years to lead the Lord’s Prayer or the Nicene Creed, for example, in the language of their hearts – perhaps the first language they learned as babies…the language spoken in their homes…

Pre-Covid (and Post-Covid, we hope) we invite parishioners to pray in the ‘language of their hearts’ – which may be English, or Koyukon, or Gwich’in, or French, or Spanish, or... Hearing the familiar words prayed in a language other than our own, simultaneously, brings a sense of fullness, that enhances our worship.

THANK YOU to all who continue to support the life and ministries of St. Matthew's during this Pandemic challenge! With your generosity, we are able to continue our ministries of, among others, offering cold-weather gear to those who need, offer food for the hungry, upgrade our ability to offer live-streamed services 5-6 days a week, and offer support and 'connection to many in Fairbanks and beyond!

Stewardship is how we nurture St. Matthew’s Episcopal Church and our worshiping community. It is how we carry forward a faith community that was given to us by those who came before, and that we are responsible for handing off to future generations. Click the button below to read the 2022 Stewardship Letter or you can simply click the pledge now button.